Hello Wembley! News from the Guildhall School of Business and Law

Owned by The Football Association, it is one of the most famous stadiums in the world and attracts some of the biggest events in sport, music and entertainment, including all international football and the FA Cup Final, American Football, Rugby League and Rugby Union.

It is a world class venue and its seating capacity of 90,000 makes it the second largest stadium in Europe and the largest in the United Kingdom.

London Met Guildhall students were able to see for themselves the outstanding facilities for players, spectators, sponsors, business, and media alike; the huge sliding roof that covers all seats, supported by world's longest unsupported roof structure with its 135m high arch, the Desso semi-artificial pitch, and the spatial walkways and restaurants.

The lighting rigs on the pitch were procured from the Netherlands and are designed to provide light and heat in order to stimulate turf growth during the winter months.

Wembley Stadium is one of many iconic sports venues in London and visits to them form an important part of the experiential learning of the sports management students. London was recently named the "Ultimate Sports City" for the second consecutive year, building on the success of the 2012 Olympic and Paralympic Games by hosting an array of major sporting events.

Danish student Michelle Svane Gustavsen said: “Visiting the different stadiums and sports venues gives me knowledge about how they are organised and gives me an opportunity to explore the different internships and job possibilities that exist within the sports industry”.

Luca Rimoldi from Milan, Italy found the visit “truly inspirational and extremely valuable addition to the regular classes schedule”. And Yemi Buraimoh from London “felt that going to Wembley gave me a first hand view of the scale of running events that I watch on TV. To have a tour of such a magnificent stadium allowed me to understand the different parts of a modern stadium." 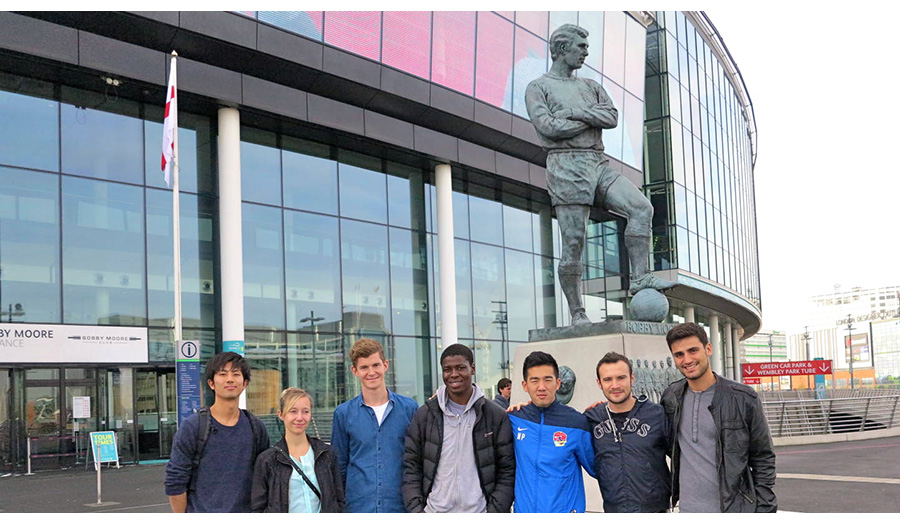