The City of London

The global financial crisis of 2008 plunged the UK into the biggest recession since the 1930s. This appears to be a tipping point of
market-led capitalism and the politics of neo-liberalism that grew out of the cold war and has dominated UK economic policy for at least
thirty years. London, as one of three major world financial centres together with New York and Tokyo, has seen insidious changes in its
development and promotion as a ‘world class’ city. A branding exercise brought to a peak by New Labour which allowed the deregulation of the financial institutions and laissez faire development promoted by Margaret Thatcher in the 1980s, to flourish unchecked until the crash. This has resulted in obscene discrepancies in wealth between the financial ‘community’ and the majority of Londoners, nowhere more clearly experienced than between the Borough of Tower Hamlets and The City of London.

Unit 5 studied the City of London during the course of the year in the abovementioned context. The Unit’s aims have been ambitious and wide ranging - to study the City of London from it’s Roman beginnings, it’s development as a centre for trade in the middle ages to the inauguration of the Bank of England in the eighteenth century, to its current pre-eminence. The City of London is shrouded in myth,
distanced from the rest of London - isolated and self policed as any ‘sink estate’ but with infinitely more power. Its focus on business
and finance since the Second World War has seen it evolve into a mono-cultural place in which people only go to work. Hardly anyone
lives there any more and yet ‘the square mile’ was once the whole of London and its walls encompassed all human activity that constitutes the idea of a city.

Our task this year has been to evolve a practice of small actions with which to analyse the City and its environs as a physical construct as well as a social space leading to the design of a City Building which contributes to the reclamation of the City’s public realm, while
reflecting each students’ position and attitude to the material they have gathered and studied. Questions we have been asking include: are tall buildings necessary in the City of London? At what point do tall buildings disengage with their urban context? Could we challenge the City to rethink its tall buildings policy, by defining the parameters of an urban code which include setting a datum for an appropriate
building height? The thesis project involved finding appropriate empty sites in the City, and existing buildings that were re-appropiated as
well as re-proposing alternative urban volumes by ‘shifting the mass’ of existing tower buildings.

Could another, more ‘optimistic’ form of City Building, which utilises and extends the existing infrastructure (much of which is situated in
an already complex subterranean realm) deliver the required densities? We are interested in buildings with a greater sense of generosity and porosity – spatial, social and programmatic. Perhaps an architecture that recovers monumental form and space for the City without lapsing into bombast and cliché. Design development of proposals have explored issues of scale and the possibility of the co-existence of scales and occupancy, considering also the necessity for intimacy and a sense of nearness at both an urban level and the interior.

Preliminary investigations included: a study of city skylines - silhouette as city signature (including analysing Canaletto’s painting
of St Paul’s from the Thames riverside); Wren’s City churches measured and set in context through drawing of interior space and modelling of external form; an audit of tall buildings in the City; comparative studies of city block typologies, the planning history and current planning regulations of the City of London, including the St Paul’s viewing corridors.

The City Building project also addresses the generic versus the site-specific, and issues of adaptability over time. For example,
Soane’s (now largely erased) Bank of England - a walled ensemble of buildings that acts like a ‘city within the city’ - evolved over a
long period of time. In ‘The Architecture of the City’, Rossi defines architecture not only as consisting of single buildings or cityscapes
with ensembles of structures, but more as a process of building over the course of time. Identifying the notion of the ‘locus’ and ‘urban
geography’ as defining the conditions and qualities necessary for understanding the ‘individuality of the urban artefact’, he
investigates the accompanying concepts of typology, monumentality and the collective memory. These are re-addressed in his later thesis of the ‘Analogous City’, in an attempt at revealing the relations between the imagination and reality.

‘The construction of reality occurs because architecture relates to existing objects and to the city, to ideas and to history. (...) I
believe that the power of the imagination is factual...I believe in the power of the imaginary arising from the factual. (...) ’I could
ask myself what ‘the real’ signifies in architecture. For example, it might be dimensional, functional, stylistic, or technological fact? I
could certainly write a treatise based on such facts. But instead, I think of a lighthouse, a memory and of a summer. How does one
establish the dimensions of these things, and indeed, what dimensions do they have?'

Aldo Rossi from A Scientific Autobiography, 1981

The unit study trip was to Ljubljana, Slovenia and Monte Carazzo, Switzerland, where we studied and surveyed the work of Joze Plecnik
and Luigi Snozzi, relating the work of these architects, each of whom devoted a greater part of their career to working in a particular
place, to Christopher Wren and his work in the City of London. The outcome of these studies resulted in an exhibition at ASD in early May 2012, entitled ‘Three City Architects: Wren, Plecnik, Snozzi in May 2012. Having met and spent a day with Snozzi at Monte Carasso, we were able to later invite him to ASD to deliver two public lectures to the school, as well as participate in our final crits. We are grateful for his contributions and his generous spirit.

In November and December 2011, we worked with the staff and workshops at The Sir John Cass School of Art, Media and Design as part of the Aldgate Project (set up by FASD’s Projects Office and Publica) to make an ensemble of Mobile Sound Pieces. These were series of 1:1 architectural sculptures with an ambiguous sense of scale, exploring the notion of monumentality at a small scale; they have been used as ethnographic instruments to engage the City and to initiate chance encounters and planned events within the public realm.

The Aldgate project has involved collaborations with Danish architect and artist Poul Ingemann, artist Nada Prlja and anthropologist Clare
Melhuish as well as design tutors William Warren and Rentaro Nishimura at the Cass. The results of the Sound Pieces workshop project were exhibited in Central House in Whitechapel in January 2012.

In February 2012, the Mobile Sound Pieces became part of a bid for the GLA funded Olympic Dressing project and was selected for realisation as Conversation Pieces. This will involve a further collaboration between the students, the Unit tutors, who have designed two additional pieces, and Poul Ingemann, who has proposed the ‘Olympic Float’, a structure which will be mounted on a flat-bed truck to carry the 8 Conversation Pieces to various locations within the City of London during the Olympics and Paralympics this summer. The carcass of this Float has been constructed and is being used as the exhibition space for the Unit, with a bay for each of the student’s City Building project and related research books.

The Unit’s work will be hosted by Peter Murray’s London Festival of Architecture as an event on the 13th July 2012. 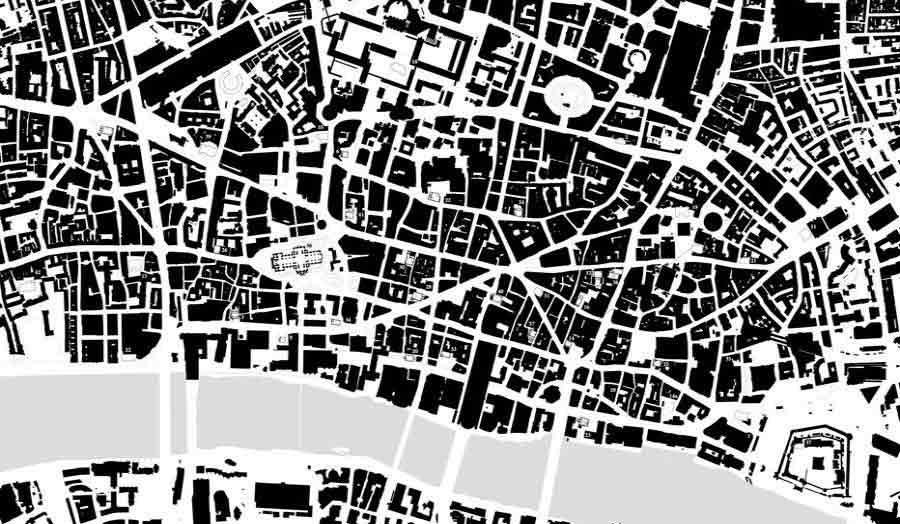 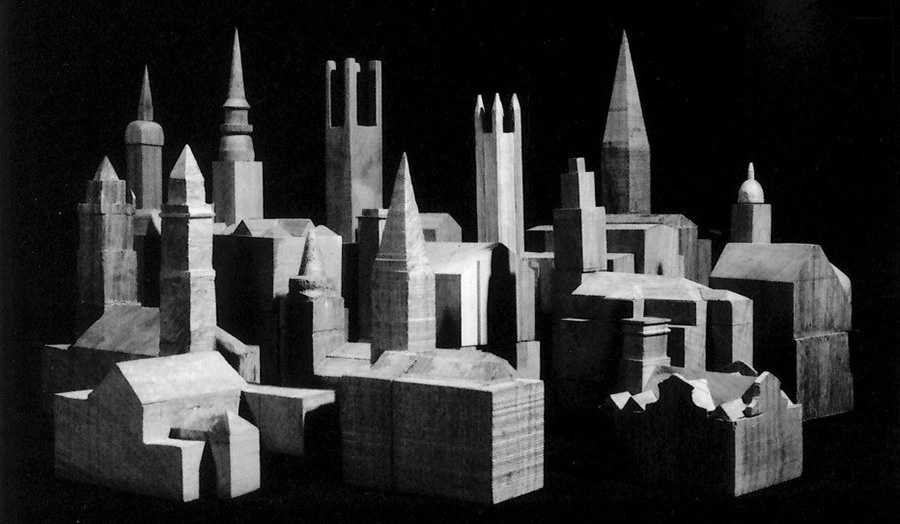 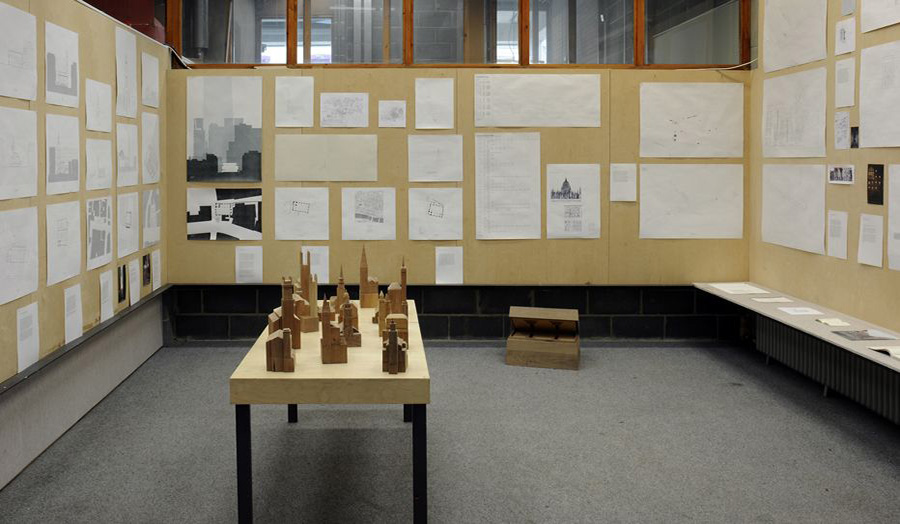 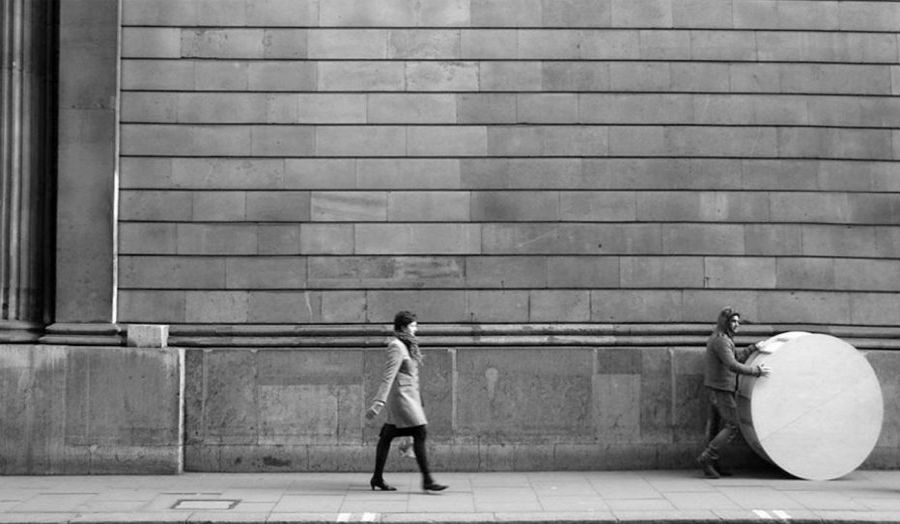 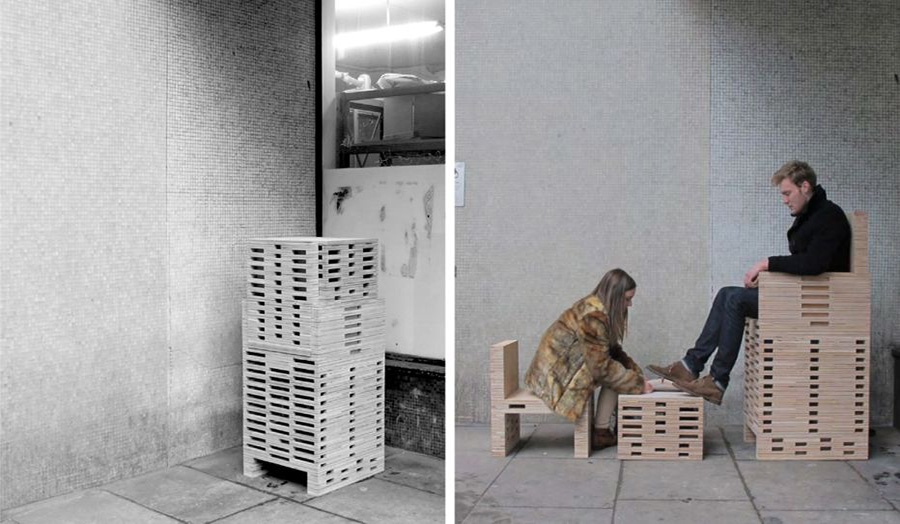 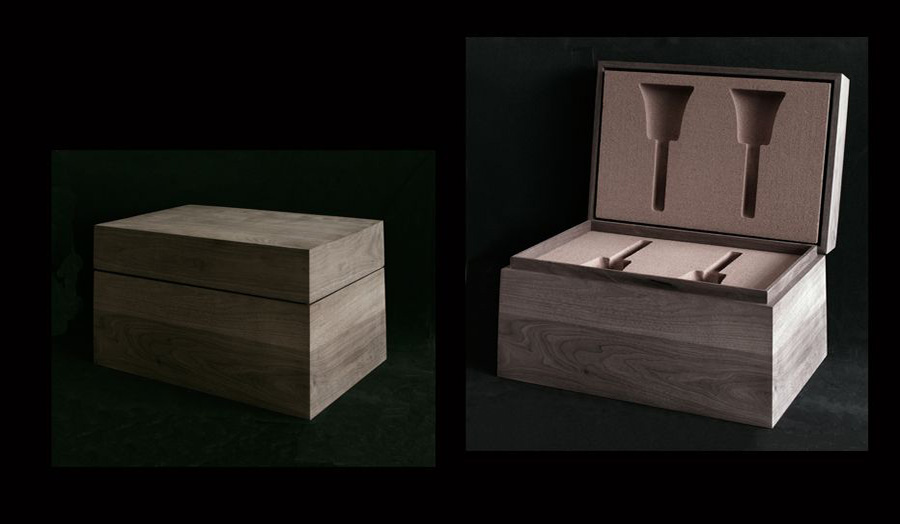 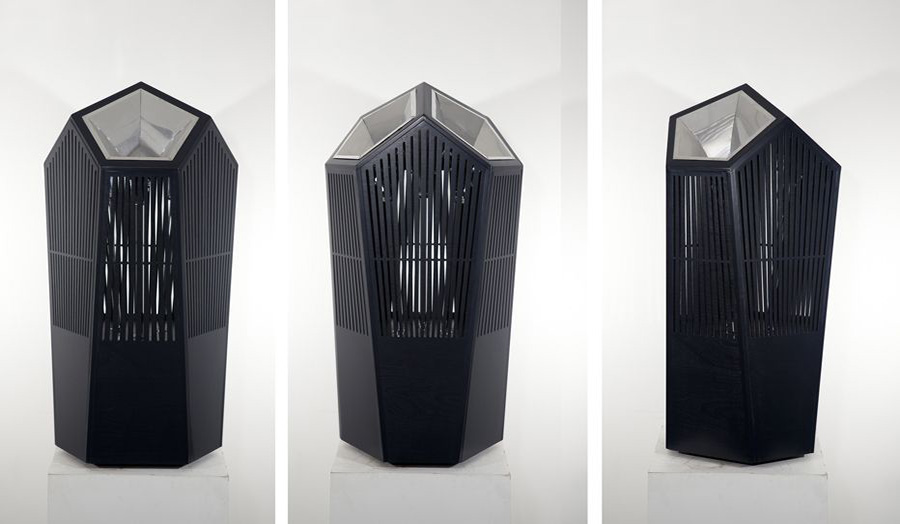 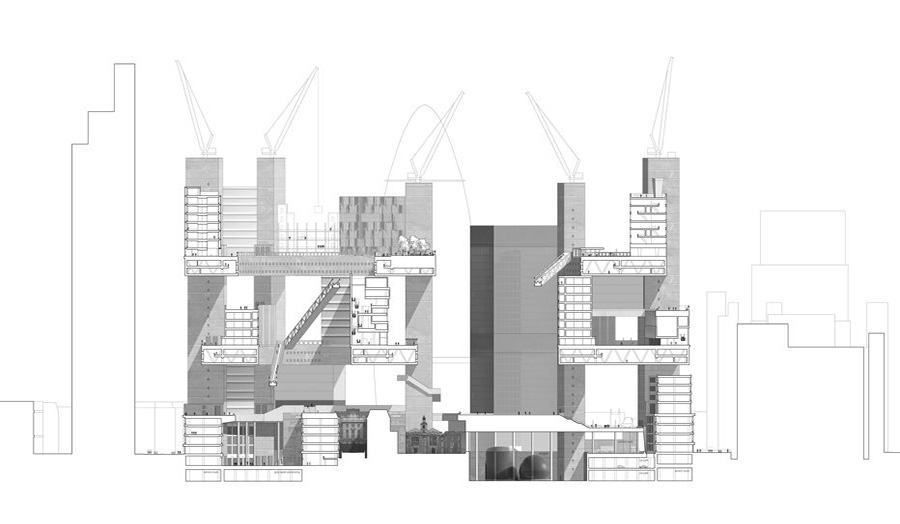 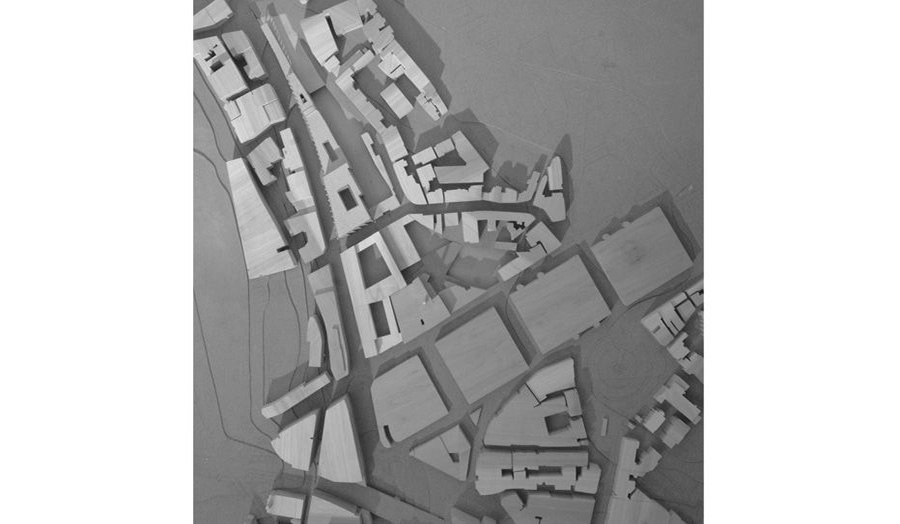 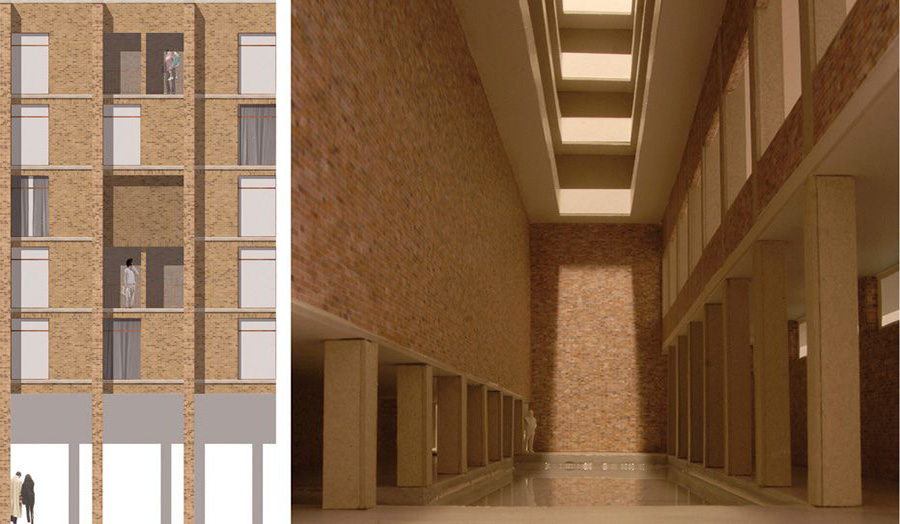 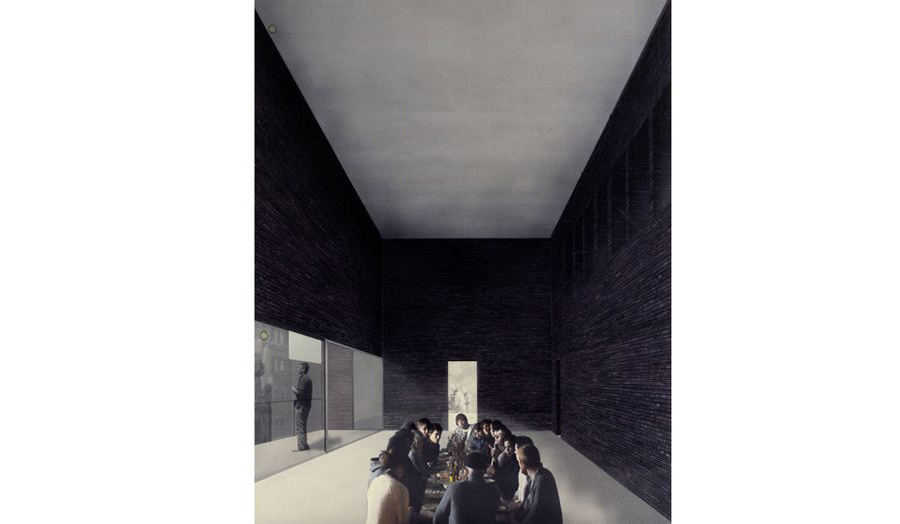 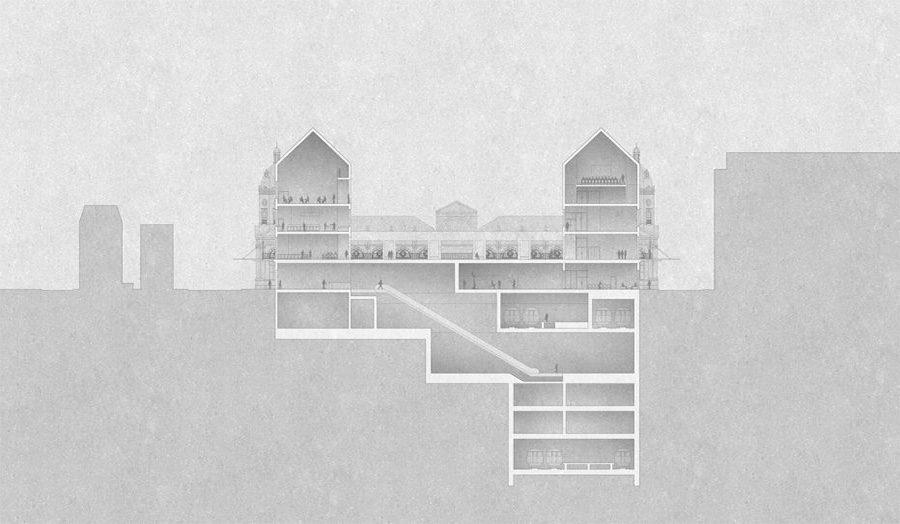 Views of the new raised courtyard and opening to the Barbican 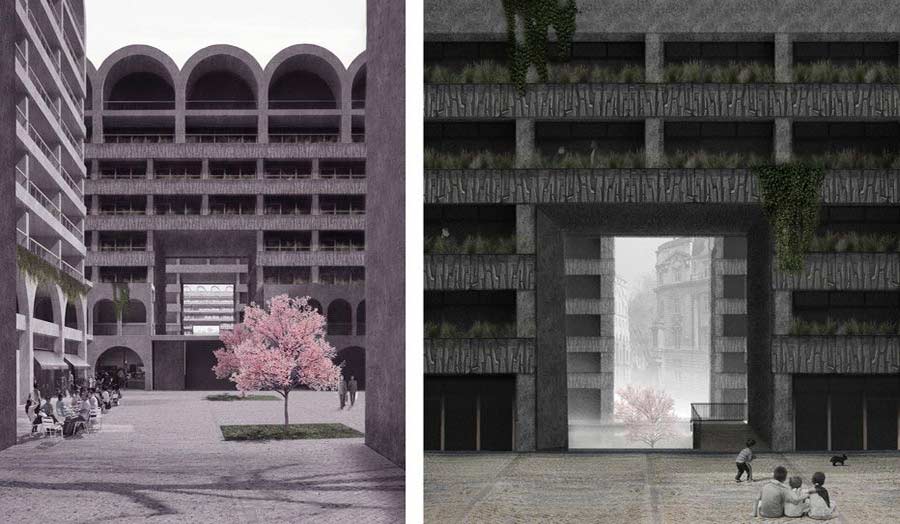 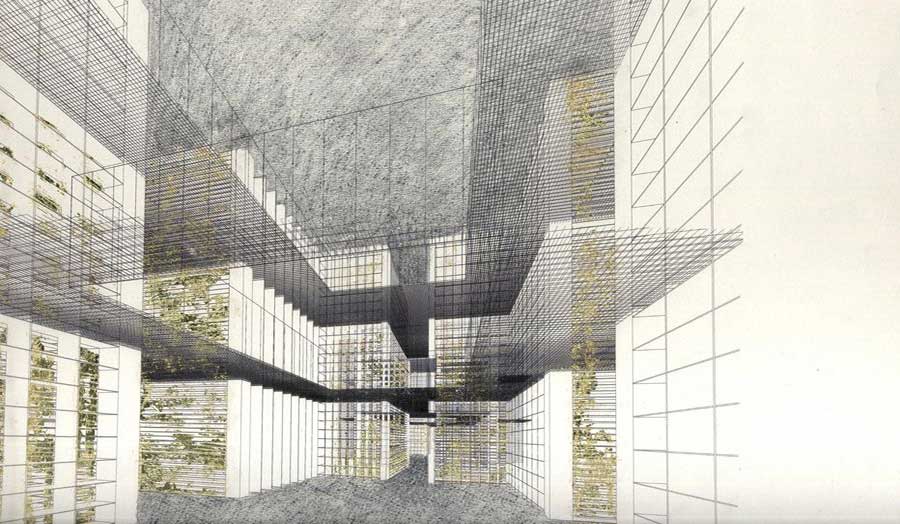 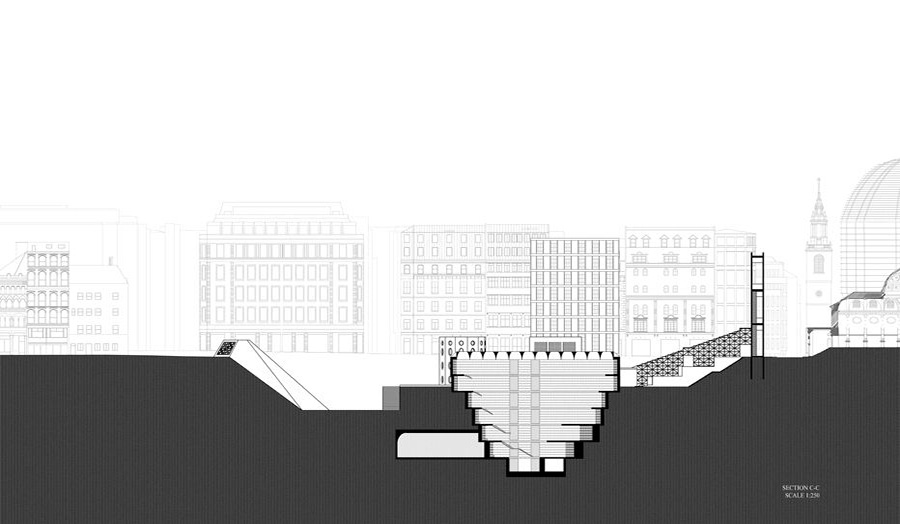 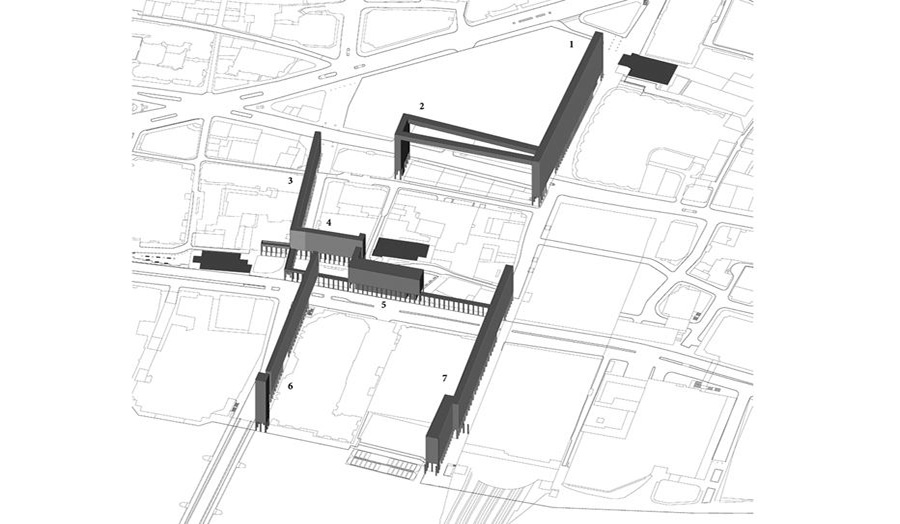 Hidden fleet recording the sound of the subterranean fleet 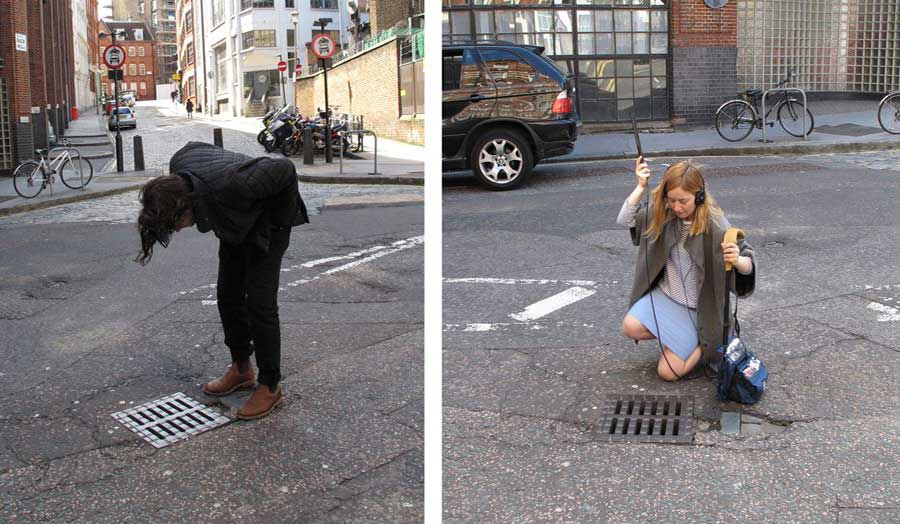 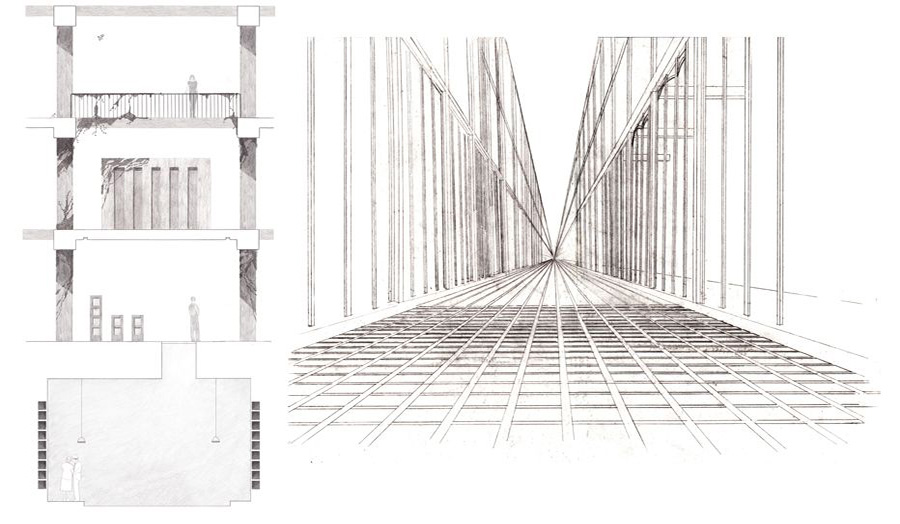 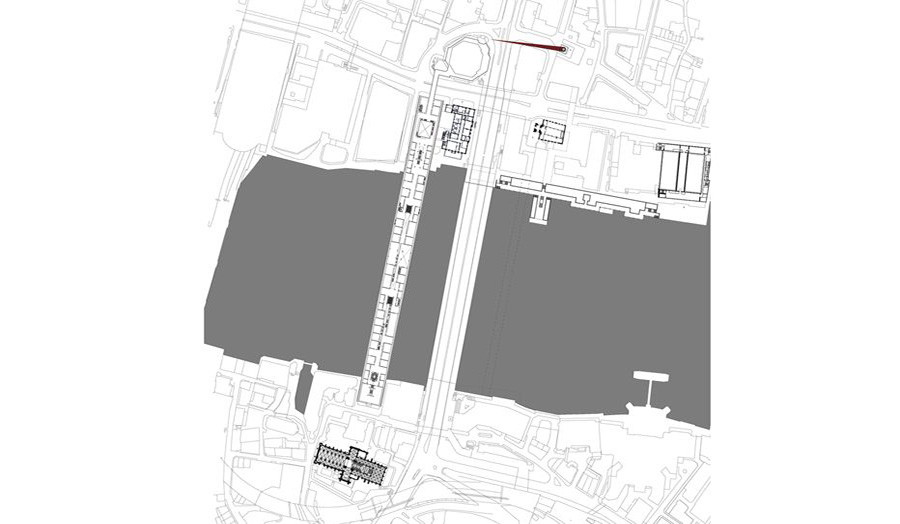 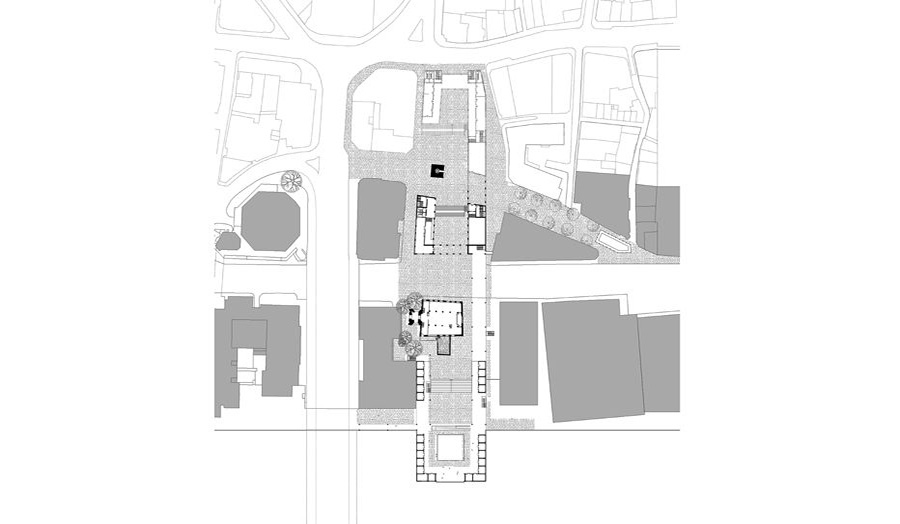