The story of Mary Prince: "To be free is very, very sweet" News

Sitting at the white table with the white storyteller, a djembe drum beats forcefully in sync with Mary Prince as she slams her hand on the table, shouting, "There was no end to me trials, no end to me blows, I lay down at night and I rose up in the morning, in fear, and sorrow."

Sold, brought to London Metropolitan University, School of Social Sciences & Professions initially by Donna Jones, Head of Social Work, is the chilling retelling of Mary Prince's life story. Brought to life in a magically and specially created performance space in The Roding Building thanks to Amantha Edmead, who also plays the main role of Mary.

The play transports the audience into Mary's world - into the harsh reality of a woman born into enslavement in the British colony of Bermuda and who later, against all odds, became a freedom champion and symbol of the abolitionist movement.

Carried by dance and impeccable movement, Yoruban and Ga songs and prayers, the two-woman storytelling evokes powerful emotions. Ga is one of the many languages from Ghana, West Africa, while Yoruba is the largest Nigerian language group and the prayer was taken from traditional Orisha prayers from the Yoruba cosmology. The djembe drums, played by Angie Amra Anderson, beats out the absolute truth, drumming a bleak truth that is difficult to stomach.

Rope wrapped around Mary's body to represent her struggle transforms into a new struggle for Mary as she's forced to trudge through salt ponds; the white storyteller's head wrap later is bundled into a baby, as Edmead portrays and voices every character.

Each horror announced and acted out is reiterated by intensifying drumming, each promise of freedom sung sweetly with softer drum sounds, and the mysterious, colourful lighting a gateway to a chilling time before.

The story begins with Mary Prince reading Alexander the Great as she sits on a crate, just a child, and quickly snowballs into her being sold as a gift to a young white child, then sold and sold and sold again. The performance transitions to Mary's present, recounting to the white woman, telling her story to be edited and written, and flashing back through her life and the events that transpired.

Enduring floggings, overworked, and verbally spit on by her owners, Mary grew tired, so tired, finding some hope when joining the church - during which the audience joined in for a gospel hymn - and marrying her husband, Daniel James. When her owners took her away from him, Mary put her foot down and demanded to be permitted to buy her own freedom.

Eventually, Mary went on the be the first woman to present an anti-slavery petition to Parliament, publishing History of Mary Prince in 1831, and later testifying in two libel cases arising from the book. Her book became a symbol of the abolitionist movement, and helped others find release from bondage.

And so the tale ends how it began, Mary Price reading on the crate, but now the drummer, who doubles as Mary's ancestral guides, comes to her and replaces the irrelevant Alexander the Great book with her own trailblazing autobiography.

And in a sweeping movement, the two move together to the drums, and the show closes with a scene of a mother brushing her daughter's hair, the young girl reading the book in her hands, mother singing to daughter, "To be free is very, very sweet."

Mary Prince's story became popular in the UK in the 1980's with the emergence of Black History Month. Near the end of her life in 1831, Mary Prince's story was printed three separate times, evidence that it was a well known story at the time.

"That's one of the conversations we've had - how can something be so well known, and then just disappear?" says Amantha Edmead.

Originally a reflection of Amantha's life in relation to Mary's, Sold has evolved, going on three years in its current form and having been awarded Best Ensemble  at the Edinburgh Fringe Festival in 2019 and Show of the Week in 2020 at the Vaults Festival.

After the show, the director came on-stage with his colleagues to open up the floor for questions and comments about the story, the consequences, and the changes that are, aren't, and could be made. They discussed the necessity of having Black stories integrated into education beyond Black History Month, and received praise for the astonishing and moving performance.

This is no easy feat for the ancestors of enslaved people, who have been generationally displaced. Though time has healed some wounds, there is still a gash that runs deep through the bodies of Black Africans, Black Caribbeans, and Black people around the globe. Black History needs the attention that is often given to European history and Eastern philosophy, to be celebrated in its richness and acknowledged in its violation.

The History of Mary Prince is available for purchase at New Beacon Books in Islington, as well as Amazon.

* Sold was presented by the not -for-profit Theatre Company Kuumba Nia Arts (Kuumba meaning creativity and Nia meaning purpose) - "exploring rituals of the past to give voice to parables of the present" and the Unlock the Chains Collective at London Metropolitan University. 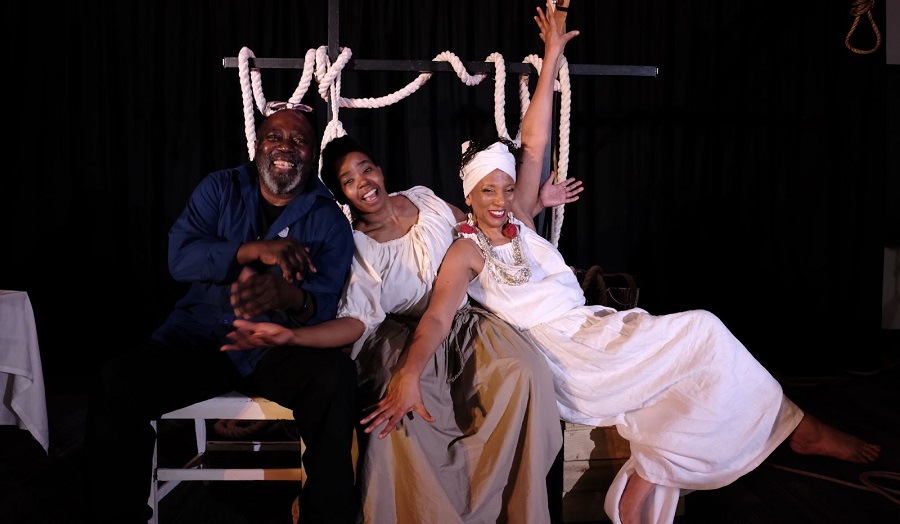