The University has also received a Stonewall Bronze Award

London Met has climbed 236 places, to 215th, in this year’s Workplace Equality Index and has been awarded a Bronze award for its work to create a more inclusive workplace, UK-based LGBTQ+ charity Stonewall announced today.

Stonewall’s Workplace Equality Index (WEI) is an annual audit that benchmarks and celebrates the efforts of leading organisations who are working to create more inclusive workplaces. Announced alongside the WEI, London Met’s Bronze award demonstrates the progress the University has made against nine specific criteria such as putting in place explicit bans on discrimination, bullying and harassment based on gender identity and gender expression, sexual orientation.

Aspiring to lead the sector for inclusive practice

Commenting on the news, Vice-Chancellor and Chief Executive, Professor Lynn Dobbs, said: “Achieving this accreditation shows we’re following the right path on our journey to creating a community that aspires to lead in the field of inclusive practice. We know that there is still much work to be done to tackle prejudice, hate crimes and discrimination affecting LGBTQ+ communities. I have been concerned by the discourse that seeks to challenge the validity of Stonewall’s activities and its important work to defend and champion the rights of the trans and non-binary communities. This agenda is so important to me, I will do everything I can to ensure we continue to improve our practices at London Met so that everyone feels safe, valued and respected.”

Pro Vice-Chancellor for Teaching and Learning and Director of the University’s Centre for Equity and Inclusion, Dr Zainab Khan, said: “Throughout the pandemic our Stonewall Steering Group, comprising students, staff and the Students’ Union, worked diligently to ensure that we implemented actions for real change. I would like to pay tribute to members of the Centre for Equity & Inclusion as well as the Steering Group, who prepared the application. This award reflects a bigger cultural shift taking place at our University, and I am delighted to see staff and the Students’ Union receive recognition for their commitment and efforts.”

Key role for the staff network

News of the WEI success and the Bronze award was warmly received by the members of the University’s LGBTQIA+ Staff Network who have played an important role in this success.

“It’s encouraging to see such a significant climb in this year’s Workplace Equality Index and to have achieved a Bronze award,” commented Brian Tutt, Co-Lead of London Met’s LGBTQIA+ Staff Network and Co-Chair of the Stonewall Steering Group “We’re really pleased with the progress we’re making, and our goal now is to continue to improve support for the LGBTQIA+ community at the University, move further up the rankings next year and continue working towards a gold award.”

Creating the best possible experience for LGBTQ+ staff and students

According to Stonewall’s research, more than a third of LGBTQ+ staff in the UK (35 per cent) hide who they are at work, while one in five (18 per cent) have been the target of negative comments because they’re LGBTQ+.

Liz Ward, Director of Programmes at Stonewall (she/her) said: “We spend so much of our time at work, and our career can be a huge part of how we define ourselves. Every single lesbian, gay, bi, trans and queer person should be able to be themself at work. From understanding how HR policies, such as parental leave, will affect them, to being reassured that they can speak openly about their lives and partners at the coffee machine, the impact of inclusive workplaces can be life-changing.

“It’s fantastic that London Met has gained a Bronze Award for their efforts and commitment to creating an inclusive work environment, and we look forward to seeing and supporting the rest of their inclusion journey.”

Stonewall is the UK’s leading charity for lesbian, gay, bi and trans equality, working to create a world where every lesbian, gay, bi, trans and queer person is free to be themselves – wherever they are.

It was founded in 1989 by a small group of people who wanted to break down barriers to equality. Stonewall continues to campaign on LGBT Equality, as well as work with employers and schools to create environments which allow LGBTQ+ people to thrive.

Find out more about Stonewall’s work. 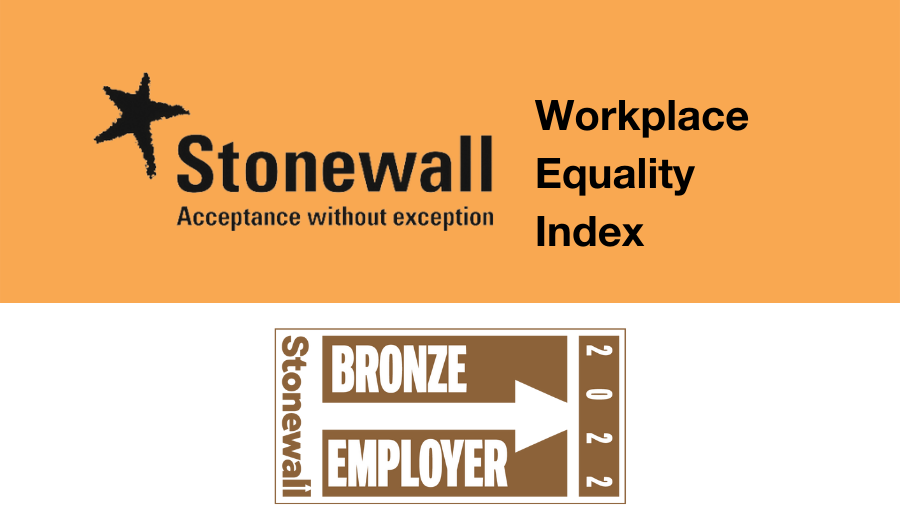