David Landreth and Laurence Prax, from the School of Law, secured victory in the first-round of one of the country’s most prestigious national mooting competitions.

Barrie Goldstone, team leader of postgraduate and professional law courses at London Met, said: “It was especially gratifying to be able to host the moot in our wonderful courtroom, which was much admired by all our visitors.

"Many thanks also to the superb judge, Elliot Schatzberger, who kindly gave up his time to judge the moot with such dignity and wisdom, and who stayed on afterwards to talk to the competitors and to give them his invaluable advice. It was very much appreciated.”

Barrie Goldstone also congratulated the students, saying that theirs was “an outstanding achievement and the result of an enormous amount of work and talent from the two men”, especially as “the team from Coventry were on excellent form.”

This was especially true of David, a first-year LLB student in the London Guildhall School of Business and Law who had never competed in an internal moot before.

About competing in the first round David said: “It was really enjoyable. Barrie really helped in the practice prior to the real thing, he was far stricter than the actual judge we had for the moot!

“It was also really helpful to have Laurence there as a senior, as he filled me in on some aspects of courtroom etiquette.”

David believes that it is important to be proactive and get involved during your time at university.

The mooting competition presents a great opportunity for students that they would normally not have to practice various skills and gain confidence.

“I think Mooting in general can be described the same way as when queuing for a roller-coaster”, David added.

“While you're waiting to get on the ride you start going over all the 'what ifs' but the moment the ride starts you just get lost in the experience and it ends faster than you thought it would.

“I honestly can't wait to do it all again, it was a really positive experience.” His teammate Laurence said: "It's a real privilege to make it past the first round of the mooting competition, especially one as prestigious as Essex Court Chambers' and considering the high calibre of our opponents, Coventry University."

Essex Court Chambers National Mooting Competition is in its 43rd successful year as the greatest mooting competition in the UK. Rounds are held throughout winter and spring, with the finals taking place in June. 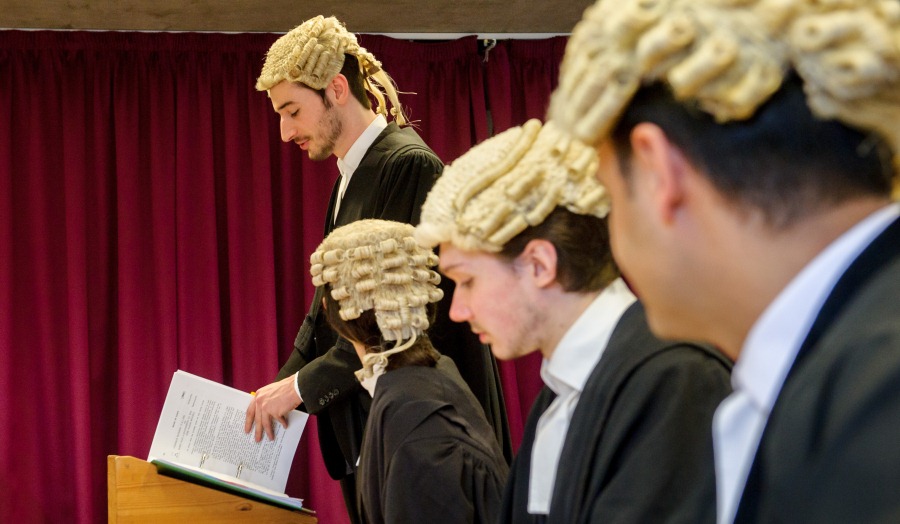