Meet one of London Met's students

Sarah Lubanga is in her final year of studying for a Health and Social Care BSc at London Met. She is also involved in a lot of charity work and has helped start the Homeless Soup Kitchen at her local Hanwell church.

Her charity work started back in 2013 when she was serving meals at the Waterloo Embankment Soup Kitchen with a friend, influenced by their church leader who told them that there were many homeless people there who would benefit from meals. The Soup Kitchen started as a small project with only six people supporting the soup run but the number has since increased.

In 2014, a new church pastor advised on local work at the back of the church hall and that’s how the local Homeless Soup Kitchen opened its doors.

“We changed Soup Kitchen to Community Lunch later afterwards because some of the guests were not homeless but had less income and could not afford to cook a nutritious meal,” remembers Sarah. “We will get anything between 12 and 50 people coming in a day.”

But her work didn’t stop here. In 2015, the Homeless Soup Kitchen liaised with other homelessness groups and operated a shelter for the month of December, in which there were 13 to 16 people sleeping at the back of the church hall once every week.

“We work in teams. I have six teams, with each team having six helpers approximately. We helped one person who was homeless to organise a wedding on 18 December 2016. Some team members bought non-alcoholic wine and some volunteered to do decorations. Some local business people help by giving bread, rice, and some foodstuffs from time to time which we, in turn, distribute to the guests who need it.”

In the last few months, The Felix Charity has started giving Sarah’s Community Lunch fresh food that is no longer needed from supermarkets. All the food is used and being turned into good meals.

“The guests are grateful to get a three-course meal and the opportunity to socialise. In February 2016, the Food Standards Agency came to check the Hanwell SDA Church kitchen that we used, and they awarded the kitchen five stars."

Sarah says that studying at London Metropolitan University has been great and has equipped her with a lot of practical skills which she applies in this Community Lunch volunteer work.

“I find the teamwork skills and interpersonal relationship so practical and they’re both emphasised in group presentations in almost all of my Uni modules. They are very useful in my voluntary weekend charity work.”

Image: Sarah is pictured (back row, second left) with other team members who helped organise the wedding and encouraged Sarah with her charity work. The bride and groom are sitting on the front row. 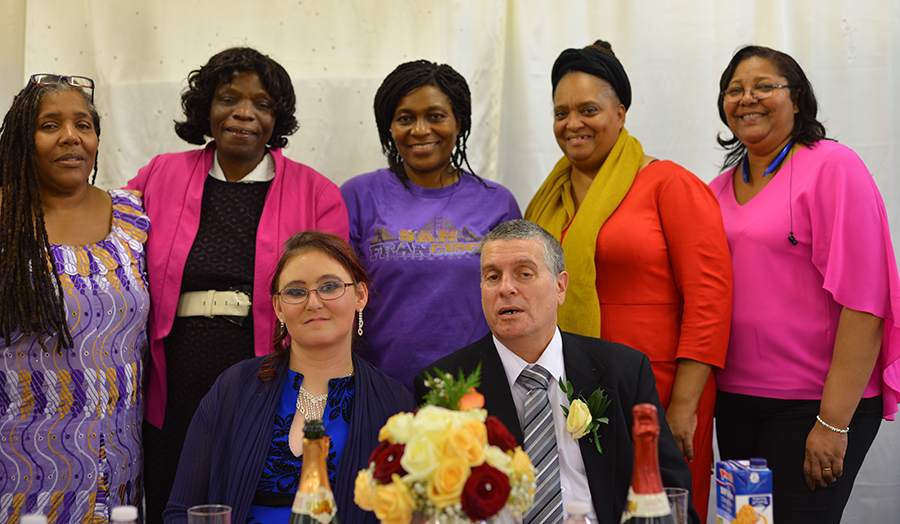